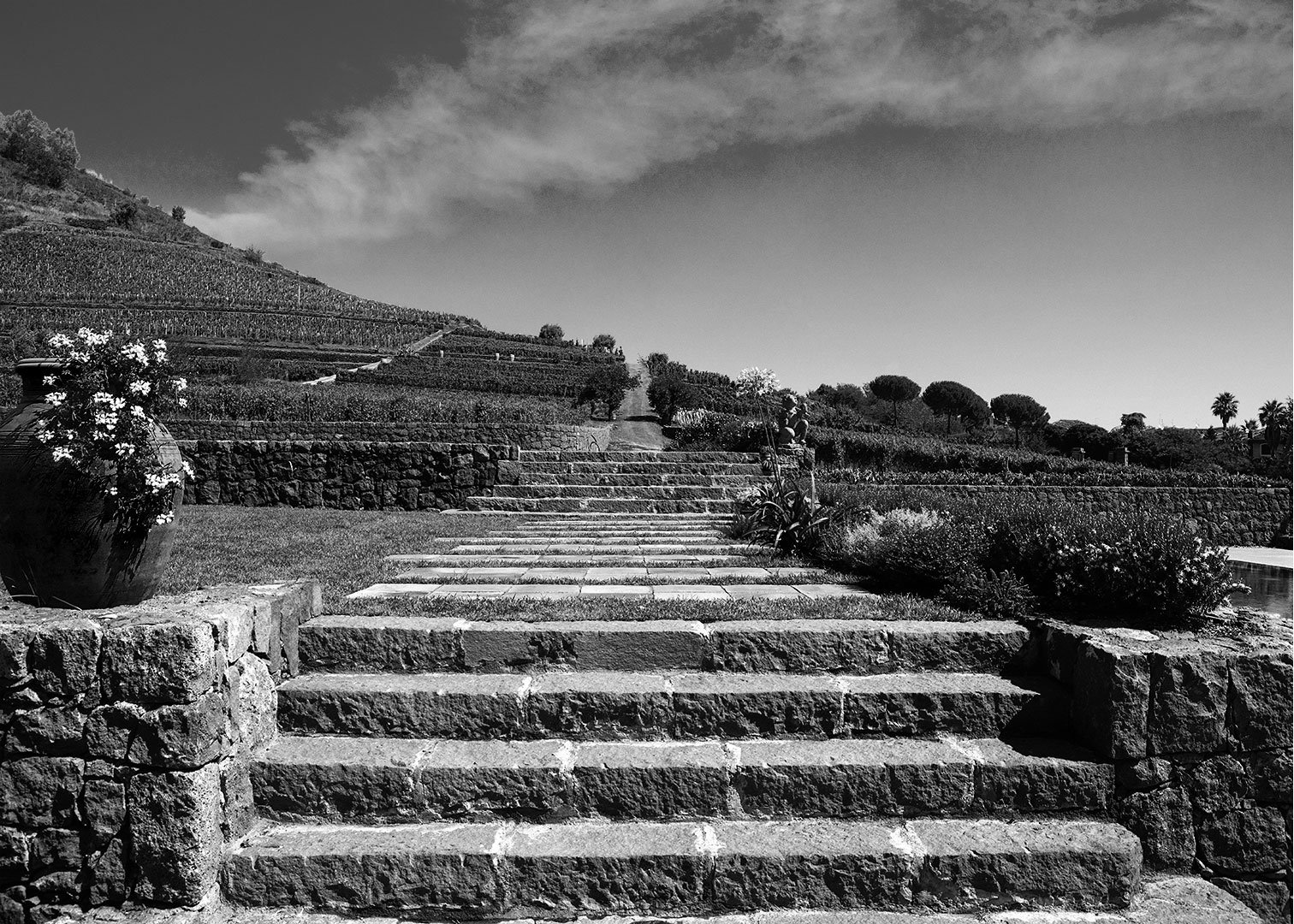 Salvino Benanti, together with his brother Antonio, has been managing the farm founded by his father Giuseppe in the 1980s for some years. From the beginnings up to the new course inaugurated with the generational change, we asked Salvino to retrace the history of a reality that has contributed significantly to the winemaking rebirth of Etna, becoming a reference point for the whole territory.

Yours is a family story even before a business one, so it’s impossible not to start from here. Can you tell us how and when your father chose to deal with wine?

I make a little historical excursus: my family moved from Bologna to Sicily in the eighteenth century, since then we have always had land and, to some extent, a relationship with the agricultural world. Then, in the early twentieth century, my great-grandfather became one of the first pharmacists in Catania. The business was carried out by my grandfather Antonio, who invented, in the true sense of the word, some original formulations in the back shop of his pharmacy. From those inventions, a real company was born that still exists today and that has a very important turnover. I made this premise because, for many years, the family’s main business was this and the countryside and the vineyards were above all a matter of passion and free time. Only in the mid-eighties my father decided to put the agricultural part into a serious and thoughtful business.

What was the spring that led him to imagine a project like that of your cellar, visionary in many ways for those years on Etna?

I believe that, having reached a certain point in his career, my father felt the need to do something entirely his own, even if smaller than the pharmaceutical company. His work certainly had an indirect role, which led him to travel a lot and to have an open and cosmopolitan mentality. This mentality combined with the strong emotional bond with the land made him want to do something highly qualitative on Etna, on the model of many wineries he had visited abroad. He had the desire to exploit all the potential that existed here but which had always lacked an entrepreneurial vision of a certain type.

There is also another aspect: for about twenty years my father continued to pursue both professions and the fact that he had a solid entrepreneurial job behind him gave him the opportunity to invest and experiment, taking all the time necessary to do so. He didn’t need to make money as a wine producer right away.

Apart from the entrepreneurial approach you were saying, compared to the wine scene of that period, what did he bring that wasn’t there yet?

Let’s say that the Etna wine world was very embryonic at the time, there were two or three realities of great quality, which however he wanted to “challenge”. He was the first to bet with conviction on the Etna DOC and on internationalization. And, something new here in those years, he set up an important work group with highly experienced local figures but also with consultants who came from outside, especially from Burgundy and the Langhe.

All of us here owe him something because he had an intuition and carried it forward, moved only by passion. Even when the same consultants suggested that he invest in international vines, my father always insisted that the focus be entirely on native vines: Nerello Mascalese, Nerello Cappuccio and Carricante. Even if the disciplinary admits Catarratto, which was imported from the rest of Sicily a long time ago, we have always used only Carricante as white berried grapes because from our point of view it expresses a more marked and genuine typicality.

You and your brother Antonio supported your father in the management of the winery about ten years ago, and then took over from him. In this passing of the generational baton, continuity is evident from the point of view of values ​​and vision, but I also ask you what you have brought to the company and what figure you are trying to impress.

On a personal level, I would tell you that we followed a path similar to that of our father: when we were around forty, just like him, we felt the need to do something different, simpler and more earthly. We gradually developed the idea of ​​dedicating ourselves only to the farm and for this reason, in agreement with him, we came to the decision to completely sell our part of the pharmaceutical company to become full-time modern farmers, so to speak.

For the rest, the moment in which we entered the cellar is very different from that experienced by dad, who started alone, worked alone for a long time and also saw the situation on Etna change a lot with the arrival of new investors. We, on the other hand, arrived at a stage where everything was much more defined and coming from a managerial training it was relatively easy for us to analyze the status quo and understand where and how to intervene. I think we were also helped by the fact that we were less emotionally involved, which is why we were able to make our assessments with a certain rationality.

From these reflections and a long period of study some choices were born: to sell some land and buy others, modernize the cellar with more advanced technologies, rethink the system of our labels and make our winemaker grow. Enzo Calì has been in the company since he graduated but was previously supported by consultants, today he is the only reference figure. Now, we have a structure that for us is almost the definitive one and that has allowed us to hold up very well even in this difficult year due to the pandemic.

You said that you intervened on the label system, how?

The goal was to make our portfolio more intelligible, which very much reflected the eccentric character of our father. He started, by personal inclination, with wines with a very long aging: Pietra Marina, Serra della Contessa and its twin on the north side, Rovittello – our icons in short – were born immediately. Since these are niche wines, both for their complexity and for a matter of price range, over time, it has expanded the offer with wines that are easier to approach. In this way, however, a polarization has been created: on the one hand, labels to drink easier for a wider audience, on the other, collectible wines, with no nuances in between.

We tried to fill this void, rethinking the two poles at the same time: we pushed the three Icons even higher – extending the refinement from three to five years and making Serra della Contessa and Rovittello become reserve – and we lightened the base ( which today we call the Traditional) compared to the approach of our father, who just can’t conceive wines that don’t stay a lifetime in the cellar!

Now they are leaner: they are wines of great typicality, not ruffians, where the vine emerges with strength and simplicity. They are also long-lived wines but are clearly designed to be released every year and for daily consumption.

The middle band is represented by the Contrade.

Yes exactly. They are a sort of organoleptic map of the typical features of Etna, because in this case we vinify by area and therefore observing the DOC, from the north, east, south, south west, we meet various vineyards and each produces a red or a white or sometimes both . It is a line that allows us to appreciate – in a horizontal sense – the significant differences between the different areas and is destined to grow in the coming years.

Returning for a moment to the two Icons Serra Della Contessa Particella No. 587 and Rovittello Particella No. 341: for some years now you have applied a sort of extreme zoning, because you work on single plots, as the two labels also report.

Yes, they are reserve wines that come from very old vines, are aged for five years and are produced in extremely limited quantities. We have been releasing them since 2015 with the idea that people buy them not to consume them immediately but to leave them in the cellar for at least another five or six years, because they are wines that can be fully appreciated when they reach a high level of ripeness. Our desire is that the collector can gradually build his own vertical.

How does your recent study on indigenous yeasts fit into this process?

As a good perfectionist and chemist, our father, to a certain extent, felt it was time to abandon commercial yeasts in favor of something indigenous. We have soils that are so different from the rest of Sicily, moreover the children of a still active volcano, our vines are indigenous: it is a contradiction to work with yeasts that can be used to make any other wine anywhere in Italy. We were looking for a yeast that was stable enough to ensure perfect vinification but that preserved the organoleptic qualities of the grapes, without adding anything allochthonous. Our father designed the studio and then the realization took place in collaboration with the Regional Institute of Vine and Wine.

How did you arrive at the final result?

It was all very simple but also meticulous and scientifically flawless. At the end of fermentation we went to the cellars of the farmers who still produce wine, to recover from their lava stone tanks – the traditional millstones – what was left on the walls. In this way we isolated hundreds of strains, which were replicated in the laboratory and subsequently used to make micro-winemaking tests. Starting from this preliminary work, at the next harvest we isolated dozens of parcels of must and fermented them with different yeasts to understand how the same must behaved in different situations. At the end of this long test phase, we came to have only four yeasts, the ones that convinced us the most. These are in effect our yeasts: one for each of the two Nerelli, one for the Carricante and one for the two sparkling wines.

We have achieved the balance we were looking for: an impeccable, non-spontaneous fermentation, which starts, however, from a super indigenous yeast, to have a very typical and territorial wine. The controlled vinification gives it a style made of elegance, purity and discretion. In fact, we want ours not to be powerful and explosive wines but of great finesse.

Going back to the territory, perhaps the most strictly experimental phase has passed but undoubtedly there is still a lot of liveliness on Etna. How do you see the future?

Obviously, the pandemic has greatly changed the reference context and slowed everyone’s growth. Now, I believe, years of consolidation await us. In perspective there will be, in my opinion, fewer very small producers and more medium-large companies. It is also a physiological step, because in the end ours is a small DOC and there are already almost 200 wineries. In order to face an increasingly competitive market, it is necessary to be adequately structured, from a financial point of view and from that of the approach: one must continue to be romantic but one cannot improvise anymore, one must have the ability to invest, be very consistent in everything. – in small and large things – and give oneself a broad horizon. Those with broader shoulders have more tools to cope with all this. Moreover, it is inevitable to proceed in this direction if our DOC really wants to compare itself with the great international realities.

In all of this, the great thing about Etna is that it has created a sort of movement of young producers, all very passionate and respectable who believe in quality work and work as a team. And this is very important: working not only for oneself but also for the enhancement of the entire territory makes us all stronger.