VERTICAL VITICULTURE: A JOURNEY AMONG THE HIGHEST VINEYARDS OF EUROPE

How high can you go in Europe with the cultivation of vines? The question is more actual than ever, given the effects of climate change and the increasingly frequent attempts to find a decisive answer in the altitude. There are several vineyards that claim to be the highest in the Old World. The purpose here is not much to decide the winner from the orographic point of view, or compile an exhaustive list, but rather to quote some of these cases, and outline some distinctive features that characterize the vineyards in quota and the wines that derive from there.

Southern Spain, with La Contraviesa mountains, looks like it managed to reach the highest altitudes. We are close to the National Park of Sierra Nevada, southeast of Granada, at an impressive 1.368 meters above sea level altitude, mitigated by warm winds from the Alboran Sea. Here Barranco Oscuro winery cultivates 10 hectares of land, a non-trivial extension for
such extreme conditions. Among the cultivated vines there are both a number of autochthonous and some international including Pinot Noir and Merlot. 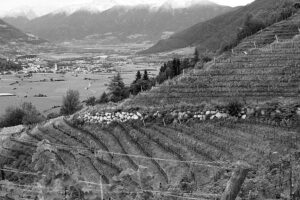 In Italy’s South Tyrol, precisely in the upper Val Venosta, there is another place that competes with the just mentioned Spanish case. Here Calvenschlössl winery cares for several vineyards, including a very special. It’s called Marienberg, and it was the namesake Benedictine monastery to grant the land so that it could be cultivated. The incredible altitude where the Solaris vine grows is 1.340 meters above sea level, truly a breath from the title of the highest vineyard in Europe. It’s a place of incredible charm, where the millenary history of the Benedictine monastery merges with steep sceneries of dazzling beauty, with Lake Resia standing out with its crystal clear waters.

Again in Italy, but at a completely different latitude, viticulture flies again up to 1.300 meters above sea level. We are in Calabria, in Cava di Melis, a small town in the heart of the
Sila National Park, in the municipality of Longobucco. The winery is managed by Immacolata Pedace and cultivates various international vines including Cabernet Sauvignon,
Cabernet Franc, Merlot, Pinot Blanc and Chardonnay. Viticulture at heights like this is often prohibitive: in this case, is made possible by a delicate intersection of factors, including the
presence of Lake Cecita, which with its influence acts as a mitigating element allowing to overcome the harsh and snowy winters during which temperatures reach even 20 degrees below zero.

Back to the north of the country, Valle D’Aosta is also known for the impressive altitudes of its viticulture. It’s at 1.210 meters, in the northwest part of the region, where the well-known Blanc de Morgex et de La Salle was born, produced with Prié Blanc grapes. One of the most representative wineries is the cooperative Cave Mont Blanc, today with about 80 members, each of them cultivating a small vineyard overlooking the Mont Blanc. 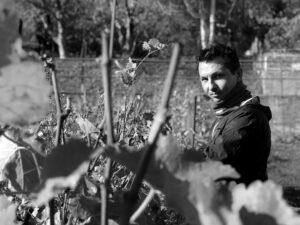 Back to Trentino now, and specifically to the Valle di Non, where we can find the very interesting Vin de la Neu, a winery led by Nicola Biasi, an internationally-known winemaker
famous for his ability to grow and lead different markets with several Italian wineries. More than ten years ago Nicola decided to plant over 800 meters of altitude the resistant variety Johanniter: 2013 is the year of the first harvest.

One of the most interesting traits of Vin de la Neu’s work is the experimentation that today, through science and knowledge, allows the production of wines at higher altitudes than the past. One of the fundamental building blocks that allows to achieve this goal is the study of resistant varieties, such as the Johanniter. The results they give from an agronomic point of view against fungal diseases (and not only) are truly extraordinary. This, of course, allows for a total absence of treatments in the vineyard, and therefore to carry on a viticulture that can be really defined as sustainable and respectful of the territory.

The result in the glass is tangible and unequivocal. Nicola’s wines are characterized by great purity and cleanliness, with an expressiveness that leaves its mark.
The 2017 vintage of Vin de la Neu, in particular, is characterized by rigor and freshness both coming from the mountain environment where it was born. Orange, pineapple and some pleasant herbaceous nuances join a range of scents typically belonging to the mineral range such as graphite. A mottling of tertiary perfumes is added on top, with nuances of hydrocarbons and iodine reverberations standing out clear. A tense sip, rich and perfectly centered contains the soul of an innovative project that makes harmony with the mountain environment its distinctive hallmark.