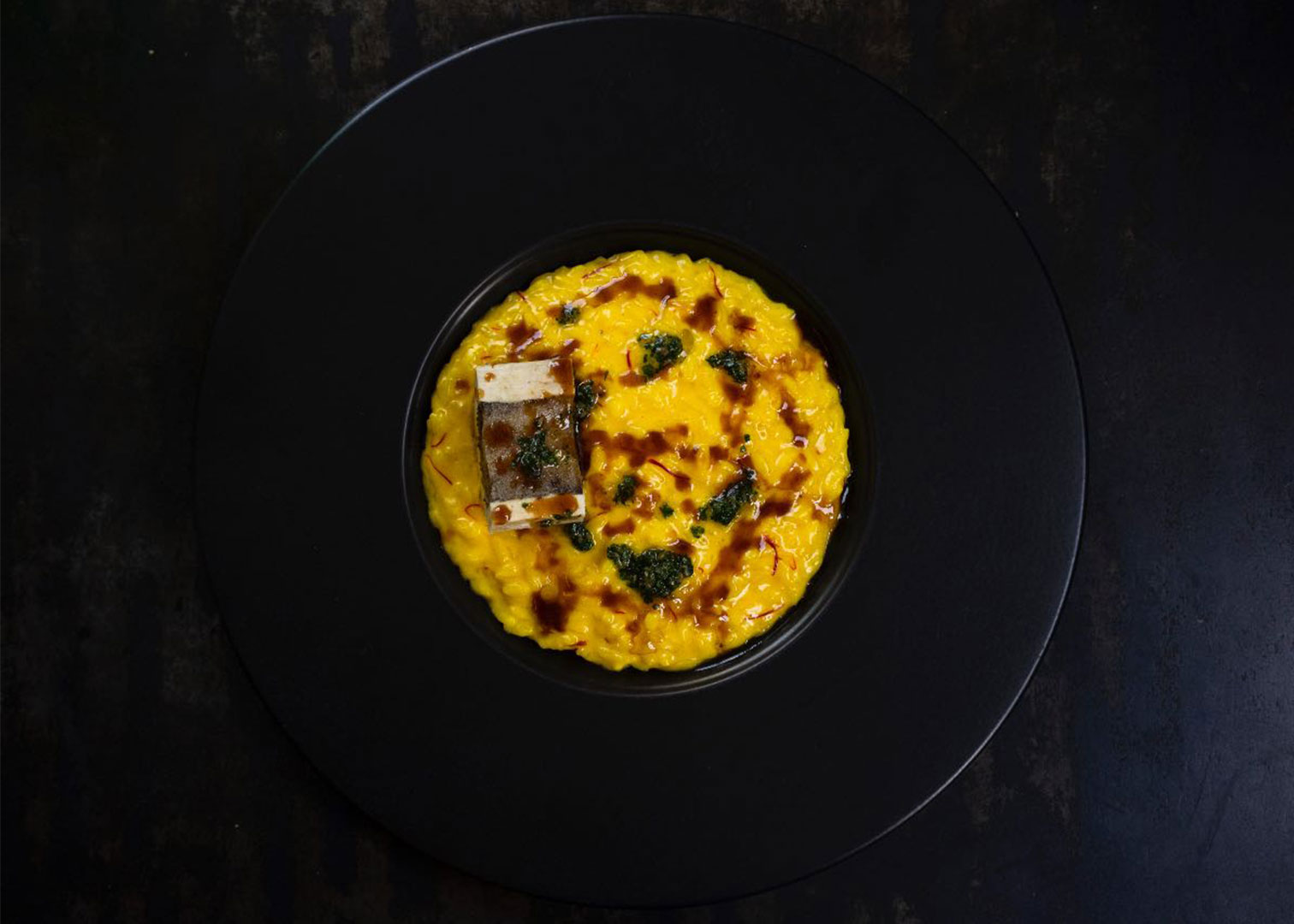 The persuasive and unmistakable scent of saffron, the creaminess of the butter creaming that wraps the rice grains, the umami richness given by the generous addition of Parmesan but also by the meat broth and, if desired, also the marrow enveloping fatness, which someone loves to add to end of cooking or off the heat, already cooked separately.

Risotto alla Milanese, or simply yellow saffron risotto, is a symbol of home cooking on great occasions due to its gustatory opulence anticipated by the golden color given by the spice, without adding gold leaf as it did in the early years’ 80 the Maestro Gualtiero Marchesi making it an icon also of the nouvelle vague of our local cuisine.

And if, according to legend, its origin would be linked to the Duomo of Milan – with the apprentice Zafferano, a great lover and user of the spice gold color, who in 1574 out of spite ends up also putting it in the rice prepared for the wedding of the daughter of the master Valerio di Fiandra, a Flemish artist called to create the magnificent stained glass windows -, the first mentions of the recipe (with rice, however boiled, and not yet cooked in broth) date back to 1300.

While one has to wait for the 800 to find preparations closest to that which has been codified and handed down to the present day, with rice flavored with fat, ox marrow, nutmeg, broth and grated cheese. Wine – a fundamental ingredient to degrease and give a slight acidity to the dish – appears only at the beginning of the twentieth century by Pellegrino Artusi, who proposes a variant of the recipe that uses white wine, appreciated by many.

The yellow risotto preparation, more or less canonical, enters by right into the group of the great classics of Italian cuisine and requires careful preparation down to the smallest detail, starting with the choice of rice which should preferably be Carnaroli, or Vialone Nano, and from use of saffron in pistils. Just as much care, then, requires the choice of what to combine in the glass.

Whether it is the version with or without ossobuco, the most suitable choice is undoubtedly a red wine of fabric, sufficiently mature and full-bodied but with its own elegance, perhaps with a Nebbiolo base. For example, the intense character and velvety tannins of Gattinara Vigna Molsino di Nervi – whose name, in Piedmontese dialect, means “soft” – could perfectly accompany the “basic” version of the dish. Obtained from a vineyard set in a natural amphitheater at the foot of the Piedmontese Alps, it displays beautiful floral and red fruit notes on the nose with some spicy hints while in the mouth it is silky, very drinkable, with a fruity and incredibly savory finish.

The marrow presence could instead direct the choice to an equally iconic and enveloping label such as  Barolo Francia Giacomo Conterno’s, a true monument of Piedmontese elegance and charm. Its complexity is immediately perceived on the nose, with hints of small red fruits (some even find some hints of watermelon in them) accompanied by a mentholated and mineral profile. In the mouth it is powerful and elegant at the same time, very balanced, soft but with a savory and fresh finish that invites the next bite.

The slightly out-of-the-ordinary alternative could be represented by a nice bubble, with the perlage pleasantly contrasting the creaminess and fatness of the risotto. In this case, however, the suggestion is to focus on a Blanc de Noirs or in any case on a wine with an important base of Pinot Noir.

You are certainly on the safe side by uncorking a bottle of Dom Pérignon Vintage 2010 in which freshness, minerality and enveloping blend, combined with a remarkable persistence. The result of a vintage made difficult by sudden rains, in which the mastery of the Maison has been able to preserve the characteristics of the pinot noir which here alongside the 50% chardonnay, is fresh on the nose – with notes of flowers and tropical fruit – but rich and intense on the palate that is caressed by spicy and peppery notes and a fascinating salty finish.

But it will also be fine to opt for a Franciacorta Docg such as the Vintage Collection Dosage Zéro Noir 2011 by Ca ‘del Bosco, Pinot Noir in purity with a very fine and persistent perlage and a full but very drinkable sip with flavors of aromatic herbs and spices and a note slightly smoky to complete the profile of tropical fruit and citrus.

Luciana Squadrilli is a professional journalist specialized in food and wine, she collaborates with Italian and foreign guides and newspapers telling the best side of Italy (and not only). Editor of Food&Wine Italia and food editor of Lonely Planet Magazine Italia, she deals with pizza and oil with particular attention, loves Champagne and is the author of several titles including La Buona Pizza (Giunti) and Pizza and Bolle (Edizioni Estemporanee).