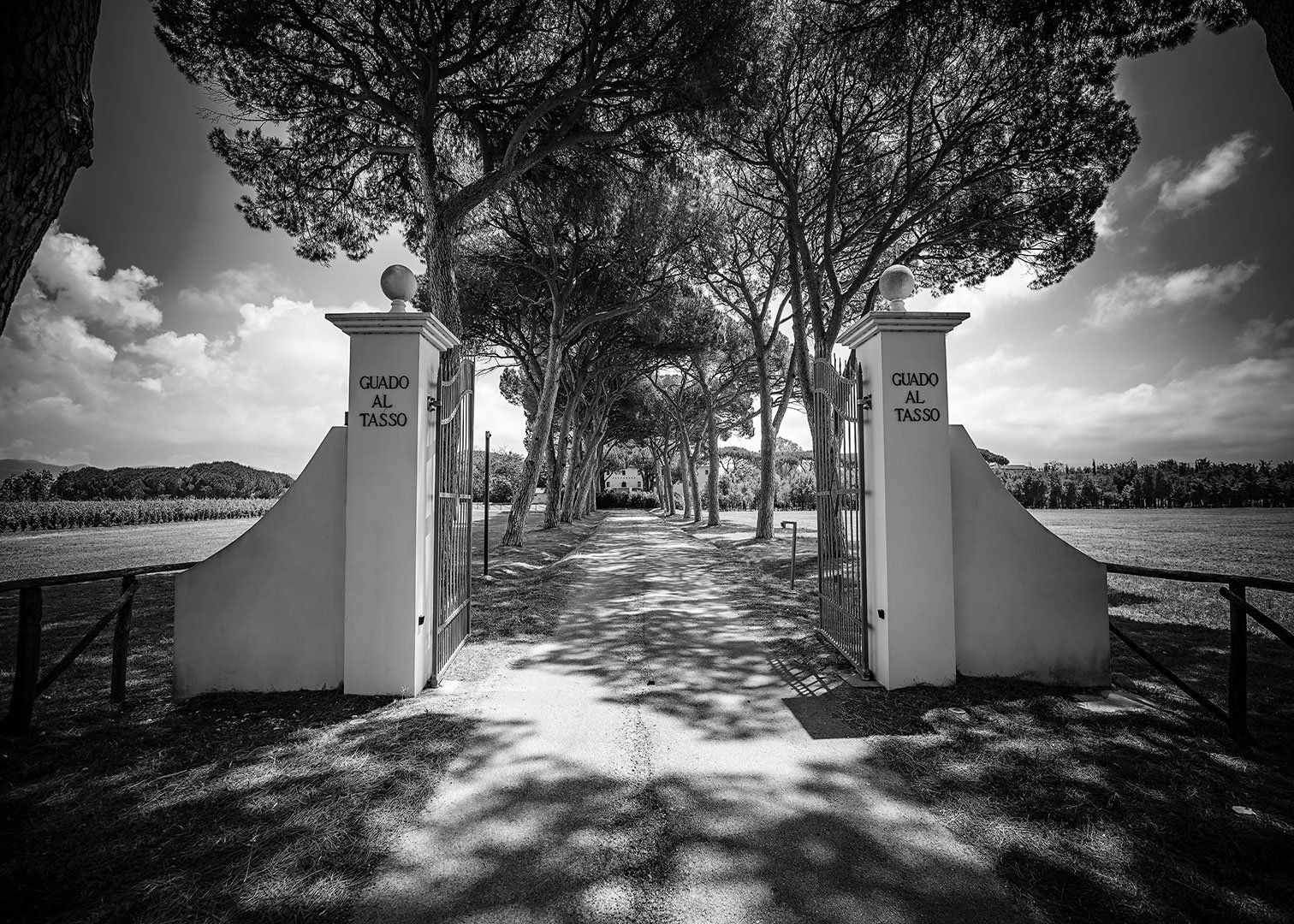 An estate with an ancient history that has been profoundly reinvented since the end of the 1980s, becoming one of the most precious and esteemed realities of the prestigious DOC of Bolgheri. Its wines – from Bruciato to Matarocchio and Guado al Tasso – are synonymous with pure excellence, much loved in Italy and abroad. We asked Marco Ferrarese – director and oenologist of Guado al Tasso – to guide us in the discovery of its history and the genesis of its labels.

I would start from the Guado al Tasso environmental context which, in addition to being of special beauty, is also extremely peculiar as regards the composition of the soil and the exposure of the vineyards. Marco Ferrarese tells us about it and explains what imprint he gives to the wines of the estate.

The vineyards are made up of three main bodies: the most important is the one that extends from the hills slopes and is located in a central position with respect to the Bolgheri Amphitheater (this is the name of the splendid plain surrounded by hills), halfway between between Bolgheri and Castagneto Carducci. It is also the place where the administrative offices and the cellars are located. We then have some vineyards to the north of the DOC near the town of Bolgheri and to the south, under the Torre di Donoratico near Castagneto Carducci.

Our vines hectares are made up of a mosaic of many different vineyard plots, each of which is divided according to the enological destination, which is closely linked to the soil characteristics, its homogeneity, exposure, age of the plants and finally to the experience gained over the vinification years of those grapes, which is perhaps the most relevant thing. This means that in each vineyard parcel the one that according to our experience is cultivated is the variety that, in that particular parcel, is able to express itself at its best.

All this helps us to give each of our wines its own style and personality that is repeated over the years, with the necessary nuances linked to the vintage, and which makes them somehow recognizable.

Antinori represents something unique in the Italian wine context, both for the long history it has behind it, and for the oenological heritage represented by its estates. What does it mean to be part of a reality of this type, where there is a strong and coherent overall entrepreneurial vision but at the same time each estate has a clear and indisputable identity? How do you combine the project uniqueness with the overall frame?

Marchesi Antinori is undoubtedly a unique reality, where each technician, while dedicating himself to his own reference estate, has the opportunity to constantly confront himself with the others. Just as in the historic estates, of which Tenuta Guado al Tasso is a part, even in the youngest realities we work to produce excellence wines that are the maximum expression of a grape grown in a specific area. In some of these realities projects have already come to light, while in others there are who are still working on them. This spurs each of us to constant improvement, which is primarily linked to the quality of the wines.

But in following a farm there are many aspects to consider in order to be considered “good technicians”, and in this having direct and clear internal comparisons is not a trivial matter for both personal and company growth.

The peculiarity of each new project, in my opinion, comes out in a way that can be said naturally, because each technician puts his own and above all because each territory has its own peculiarities. A control room obviously exists and is represented by the Antinori family and Renzo Cotarella who, in addition to being the CEO of the company, is also head of oenology. And this serves primarily to ensure that the style of each wine, from new to historical, is the one desired by the family.

One thing that somehow surprises me about this company is that, despite having a long history as you say, it maintains an approach to work that in some respects is similar to a start-up, and this is something that excites me.

Speaking of the identity of Guado al Tasso: its history is ancient, linked to the Della Gherardesca family and not only to Antinori, but the estate as we know it today owes its fame and prestige to the wines you have started to produce since the nineties. What happened in those years and what has changed in terms of production and company philosophy to lead to wines such as the homonymous Guado al Tasso, Il Bruciato, and Matarocchio?

What changed everything at the end of the 1980s was the decision of the Marquis Piero to produce “his” red wine in Bolgheri. In fact, up to that moment Antinori was marketing Sassicaia which, even if made by its oenologist Giacomo Tachis, was owned by his uncle Mario Incisa Della Rocchetta. The roads separated in 1989 and in 1990 the first vintage of Guado al Tasso was born. At the time, the company had just over 60 hectares of vineyards, partly intended for the existing Scalabrone rosé. From 1995 to 2001, important resources were allocated for the new vineyards creation, reaching a vineyard area of ​​300 hectares. It should be remembered that these are the years in which the Rosso, Rosso Superiore and Sassicaia types are included in the DOC Disciplinary (1994) which previously only mentioned the white and rosé types, while in 1995 the DOC Protection Consortium was established. The company philosophy changes, as does that of the territory that begins to create its own identity.

This is why, according to Marquis Piero, there was a wine lack at the time that could make the Bolgheri area known to a larger consumers number, while maintaining an important quality and at the same time a more accessible price. Thus in 2002 Il Bruciato was born, from the desire to tell and make known the unique Bolgheri terroir in a modern style. A wine that was very popular right from the start, which had a great success with the public and still represents a gateway to getting to know Tenuta Guado al Tasso and the territory it represents. The desire to experiment is in the company’s DNA and there was a desire that the Marquis had for some time to satisfy; to produce an ambitious wine, extremely elegant and full of character, which was the maximum expression of a single vineyard and a single variety. Here, from a vineyard planted with Cabernet Franc, in an area already well known to us for its vocation to Cabernet Sauvignon, we get a wine that excites us for its extraordinary aromatic complexity, energetic and at the same time endowed with a grace, elegance and unique finesse.

In 2007 this exceptional Cabernet Franc replaces Syrah in the Guado al Tasso blend, determining the beginning of a new style, and is partially bottled in purity to verify its evolution in the bottle. Well, after 2 years in the cellar, those bottles became the first vintage of Matarocchio, a wine that still comes out only in exceptional years and always in a limited quantity of bottles, all numbered.

For Guado al Tasso and Matarocchio, work in a parceled way, making wine and partly refining each single parcel separately. Only at a later stage is what you call a “masterblend” defined, can you explain what it consists of, the reason for this choice and what it entails from the point of view of the practices in the cellar?

Let’s start from a basic assumption: in nature there are no absolute certainties so if you repeat the same things every year you have the same result. We would love to but unfortunately it isn’t! So this is because in every vineyard parcel for Guado al Tasso and Matarocchio, while doing things in the best way, with an artisanal approach aimed at the highest quality and attentive to the smallest detail, we need some time to evaluate the result. This means keeping the individual wines separate, leaving them to refine in barriques for at least 3-4 months.

Only after this period we have the ideal conditions to be able to select the lots to be used in the “masterblend”. It hasn’t always been like this; for many years we have carried out the assembly only at the end of the refinement because we needed to know the full potential of each parcel. Now that the know-how in the estate is greater, we can anticipate the assembly and work in more detail with another decisive factor that affects the style and evolution of our wines, namely the choice of the right barriques. A choice that is strictly influenced by the vintage characteristics, which conditions us in the choice of the level of roasting, the seasoning of the staves, the grain, the thickness, etc.

Matarocchio is a 100% Cabernet Franc. I read in the press kit that, at the time of the first experiments, it was in some ways a surprise to see how well this vine was able to express itself on your land. So, what character does this Carbernet Franc have, what distinguishes it?

It is true, the Cabernet Franc del Matarocchio was a surprise because, even though we knew that this was an excellent ground for Cabernet Sauvignon, we did not imagine that Franc too would have adapted so well. What characterizes Matarocchio is the strong natural gift that Cabernet Franc has to produce silky and sweet tannins, however, combined with an unusual energy and consistency, which make it a wine capable of evolving splendidly over the years while maintaining, precisely because in purity, a strong identity character linked both to the varietal aromatic component (more or less emphasized depending on the vintage) and to the nature of the territory where it is born with its strong component of radiance, exuberance and charm, unique.

The transformation beginning of Bolgheri into a highly suited area is certainly due to the intuitions of the 1940s by Niccolò Antinori and Mario Incisa della Rocchetta and to their collaboration. The sugello for this work arrived in ’94 with the disciplinary for reds and in ’95 with the birth of the Consortium for the protection of DOC. How important was this formal / institutional transition for the consolidation of Bolgheri?

It was a fundamental act because it made possible to identify a new territory in Tuscany, gradually replacing the definition “Super Tuscan” for our wines which, especially abroad, the already important wines produced in the area at the time, without the consumers knowing the exact production place.

From Trentino to Sicily, from the traditionalists “only steel and large barrels” to the more innovative “barriccai”, it is incredible how much the use of amphora is advancing. Regardless of the grape variety and cellar philosophy, in short, this mysterious object is appearing in all cellars … what is so special about it in your opinion? Do you plan to integrate them?

What is special is certainly the fact it is an ancient object and therefore this creates charm, curiosity and ignites the enthusiasm and desire to experiment, especially for those who want to stand out in some way. At the moment we do not plan to integrate amphorae in the production process as we believe that technically the best material for fermentation on our wines is stainless steel, and for the reds the refinement for a certain period in barriques, chosen with care and attention.